To start we will consider only the effect of a change in the speed of the fan on the flow rate, pressure and power consumption. We will assume that the fan size and air density are to remain constant.

The first three derivations of the Fan Laws are predicated on a couple of assumptions:

The first law of fans is a useful tool when working out the volumetric flow rate supplied by a fan under speed control or conversely working out what the RPM would be to deliver a required volume of air and hence what frequency to set a variable speed drive (VSD) to.

Volumetric flow rate (Qv, m³/hr) varies directly proportional to the ratio of the rotational speed (U, r/min) of the impeller.

A Factory of 37500m3  space currently requires five air changes an hour to remove waste heat generated by industrial process machinery. Later additional machines are added to the factory and the required number of air changes per hour increases to 6.1 to maintain the desired maximum air temperature within the factory. The original air flow rate, V1 is 187500 m3/hr  at a pressure loss of 185Pa due to ductwork, louvres and other system elements. 8 number 1000mm 4 pole long cased axial fans were used. From the manufacturer’s data sheet we know that to deliver this performance, the RPM (U1) of the fan is 1160 r/min. V2, calculated by multiplying the space by the new air change requirements, is simply 37500m3 x 6.1 which give a new requirement of 228750 m3/hr. So, what is the RPM of the fan required to be to deliver this flow rate increase?

By re-arranging the above formula (Eq. 1) we find that:

Substituting in the known parameters gives:

Now we need to determine if the calculated value for U2  can be delivered by the fan. The first limitation to consider is the maximum RPM (Umax) for the impeller. This can be found from the fan data sheet and in this case the Umax value is 1470 r/min, so this is okay.

Secondly we now determine the VFD frequency to drive the motor at the provide 1415r/min. 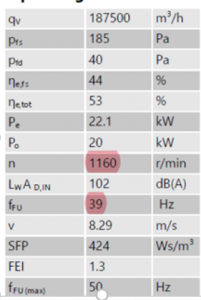 This is a simple linear relationship and can be expressed by the following:

Pressure (P, Pa) varies as the square to the ratio of the rotational speed (RPM, u/min) of the impeller.

Continuing with our first situation of the industrial process factory which has added machinery and now requires additional air flow to maintain working conditions what will the pressure development of the fans now be?

This derivation of the first of the Fan Laws is predicated on a couple of assumptions:

By using the above formula (Eq. 2) we find that:

Substituting in the known parameters gives:

The third law provides the required power to deliver the performance change that the system designer is looking for. The cubic nature of this relationship between power and the rotational speed shows how even for small performance gains, large amounts of additional power are needed.

Power (P, kW) varies as the square to the ratio of the rotational speed (RPM, u/min) of the impeller.

By substituting in the known parameters gives:

Over 20 fans the total power increase is 34.6kW! So for an airflow increase of a little over 18% the power needed has risen by nearly 45%.

In summary, fan laws are essentially about impellers and what happens to their characteristics when they undergo changes in rotational speed, air density, or are scaled in size. They also help with the understanding of ventilation systems and the relationship between volume air flow rate and system total pressure. Although there are many fan selection softwares available in the marketplace, it is necessary for engineers to have at least a basic understanding of these basic fan laws to aid their overall awareness of how changes within ventilation systems can influence performance. 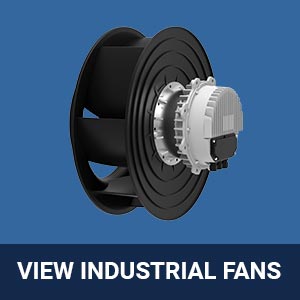 More News >> The Evolution of The Plug Fan >>