Continuous and consistent airflow is essential to virtually every facility, making under-performing or unreliable fans simply unacceptable. In addition to obvious reliability concerns, these inefficient fans can be a building’s biggest energy consumer. Given today’s economy and the increasing cause for environmental concern, designers must select HVAC plug fans which will not only provide the necessary reliability, but also provide optimum efficiency and environmental benefits. In most fan systems a single fan is selected for the required system and various methods of control are also installed to meet other operating points defined by the system duty such as dampers or variable pitch blades.

In some instances, it is advantageous to use more than one fan in a system, for example when it is necessary for the required operating range of the system to include multiple plug fans running closer to their peak efficiencies, instead of one large fan controlled over a wide operating range. Multiple fans for capacity control may be more economical if the cost of operation is critical. By running fans in parallel, when one motor fails, only a portion of the airflow is lots, unlike single fan air handlers. 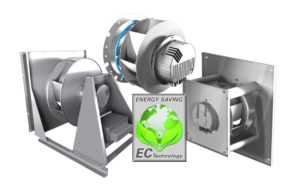 FanGrids or Fall Walls as they’re commonly known provide superior reliability as a result of their built-in redundancy. If one fan fails, only that portion of the airflow is lost, unlike single fan systems where the entire air handler goes offline. Moreover, the loss of airflow from one plug fan can be offset by increasing the speed of the remaining fans.

Typically 40% of a commercial buildings energy use comes from Heating, Ventilating and Cooling with 50% of the HVAC energy consumption coming from fans. The move from AC to EC fans in newer projects, has been quite significant due to their numerous advantages over their AC comparisons. EC fans can operate outside of their preferred operating range and still maintain a high efficiency, have reduced noise operation when speed controlled and the integrated motor makes for a compact design. Many EC fans also have built in controls and monitoring capabilities enabling users to set alarms for fan failures before the system becomes inefficient. Savings as a result of moving from AC to EC occur from both improved motor efficiency and optimising system design.

In recent months Axair has received many enquiries about constructed units with fans running in parallel. Working in partnership with supplier Rosenberg, we have developed an energy efficient solution to refurbishing old and outdated ventilation systems such as air handling units with an EC FanGrid. EC FanGrids typically use a range of backward curved centrifugal fans or plug fans to achieve the desired duty and output.

What Is An EC Fan Grid?

An EC FanGrid consists of various modular plug fans arranged in a grid construction offering numerous advantages over conventional technology and is equally suitable for new and existing ventilation systems. In addition to been compact and flexible, the FanGrid is easy to clean, replace and maintain while expelling low noise in use and delivering uniform air stream. Learn more.

When up-grading or retrofitting the fan section in an AHU requires replacement and/or removal of a large Radial Fan – this typically is a costly project, due to the construction of the building and Air Handling Unit. Often the building is grown around the Fan Unit within the years of operation

There are two options:

When replacing old and outdated units, engineers need to consider a number of factors, including the size of the entryways in the building, the spaces used for mechanical and other equipment, and future accessibility of the system for maintenance and repairs. This task can be made more challenging by the location of the units within the air handling system and the physical size of the units being replaced. One old belt driven fan may be physically too large to remove from the building through standard doorways. The use of plug fans and FanGrids in situations where time and space is an issue, risks the least amount of downtime and offer the best opportunity for a rapid return to normal system operation. All components, including the fans are small in size and easy for transportation, a huge factor in maintaining a tight replacement schedule and a reduction in costs when compared to alternative solutions.

Read more about the benefits and applications of the ECFanGrid.

Determining Spacing With An EC FanGrid

One of the more common questions regarding the design of the EC FanGrid relates to the recommended space between the fans to maintain optimum performance. To answer this, measurements were carried out in the Rosenberg certified testing labs on the impeller diameter and the duct dimensions to see how performance is affected by plug fan spacing. As a result the following ratio was established:

In the EC FanGrid selection process, if this Ratio or a larger value is achieved, there will be no negative effect on performance. 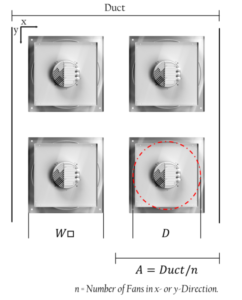 The calculation of the Ratio consists of two basic steps.

1 – First, to establish the A value, both the x and y dimensions of the duct are divided by the number of fans in each direction.

2 – Second the result must be divided through the Impeller Diameter D of the fan, shown in Fig. 2 and in the calculation examples of Equation 4 and 5 on the next page.

A good rule of thumb is:

Surround each fan with a fourth of its impeller diameter

The evaluation of using an EC FanGrid versus a single, large fan, shows considerable advantages. When operating points are compared, it is clear that an EC FanGrid will run at higher speed but generally the greater the speed of an impeller, the higher the level of noise. The large, single fan, requires a much lower level of speed to achieve the same operating point. However the larger impeller creates greater noise than an individual smaller one. In the end, the Air Flow and the Pressure remains the same as well as the noise level. Learn more.

In conclusion, sound is not an issue when using an EC FanGrid, on the contrary there will be more possibilities to significantly lower noise. When using an EC FanGrid there are two major advantages to attenuate noise. First, the noise spectrum of smaller impellers contains higher frequencies, thus the wave lengths are shorter, allowing for the use of shorter attenuators. Second, the required length of the fan section in a typical air handling unit, using a single large radial fan can be reduced dramatically – in some cases up to 50 %. Therefore, the availability of this free space installing a sound attenuator, is not complicated. Separators are not required. Without them there is no influencing between fans and they do not have any positive effect on the air performance or noise. The only requirement is to establish the correct A/D Ratio as shown in the initial image and calculation

The number of plug fans in each FanGrid system obviously varies according to the airflow requirements, for example, some may use a wall of nine fans in a three by three configuration. If only eight fans are required for normal operations, the ninth fan will be blanked off with a plate. This can easily be removed if one of the existing fan fails to achieve the duty or the existing fans ramp up accordingly. It’s clear to see from industry changes and company exhibitions such as ISH that the FanGrid is the way forward with air handling unit refurbishments and other HVAC projects. The flexibility, operation and maintenance efficiency and excellent track record for maintaining specific air quality and acoustic conditions, FanGrids are a useful solution. As the technology and sophistication of systems continue to innovate, FanGrids should be considered as a solution for retrofitting old fans as well as new constructions.

For more information on EC plug fans or regarding technical advice on spacing between fans, fan control or calculating noise within EC FanGrids contact us on 01782 349 430 or visit www.axair-fans.co.uk. If you’d like to see an EC FanGrid refurbishment you can view it on the Youtube channel https://www.youtube.com/watch?v=yGhNTHu1y0s

Interested in specifying an EC FanGrid? Complete our retrofit form with the necessary details and send it to sales@axair-fans.co.uk and we will contact you directly. See older posts here 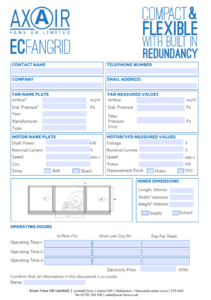