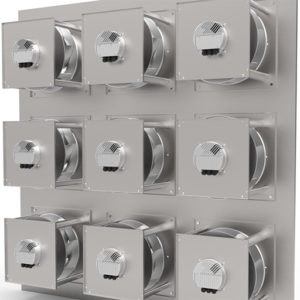 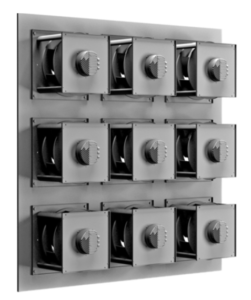 The air handling unit market is under constant pressure from all sides; pressure from the end user to improve indoor air quality, pressure from architects to provide more comfort and to produce more aesthetically pleasing units but also from energy consultants who demand manufacturers to deliver energy efficient units with higher airflow performance and pressures at lower installation and operating costs.

Commercial heating and ventilating represent a major proportion of any construction budget, frequently comprising ten percent or more of the overall project cost. With the added expenses associated with operating and maintaining HVAC systems the need to select and specify reliable equipment from reputable manufacturers is apparent especially to negate the downtime of failed systems.

In most fan systems such as air handling units, a single fan is selected and various methods of control are installed alongside it to meet other operating points defined by the system duty such as dampers or variable pitch blades.

In some instances, it is advantageous to use more than one fan in an air handling unit, for example when it is necessary for the required operating range of the system to include multiple fans running closer to their peak efficiencies, instead of one large fan controlled over a wide operating range. Multiple fans for capacity control may be more economical if the cost of operation is critical. By running fans in parallel, when one motor fails, only a portion of the airflow is lost, unlike old, outdated single fan air handlers which would remain out of order until maintenance work has been conducted.

FanGrids or Fall Walls as they’re known, such as those from German fan manufacturer, Rosenberg, provide superior reliability as a result of their built-in redundancy. When using a FanGrid, redundancy is one of the major advantages as to why it may be beneficial to run fans in parallel within an air handling unit. Within AHU systems a second or subsequent fan unit would be operating in parallel with the primary duty fan. Both are then sharing the demand. Should the primary fan fail, the second fan would pick up the full load to achieve the required duty by speeding up.

An EC FanGrid consists of various modular plug fans arranged in a grid construction offering numerous advantages over conventional technology and is equally suitable for new and existing ventilation systems. In addition to been compact and flexible, the FanGrid is easy to clean, replace and maintain while expelling low noise in use and delivering uniform air stream. When operating points are compared, tests show that the EC FanGrid will run at higher speed but will deliver a much lower level of noise which is a significant factor when considering the specification of indoor air handling units. It should be noted, however, that a large single fan will require a much lower level of speed to achieve the same duty but when airflow and pressure remain constant, the lower level of noise is a contributor to the success of the technology.

Operating an ECFanGrid at a fixed speed is considered inefficient and therefore not recommended, so to be efficient, a closed loop control should be used. Contractors and installers will recognise that the most common control challenges that the air movement industry is faced with are, airflow, pressure and temperature. To manage this, new technology within EC fans gives the built-in ability to manage airflow and pressure with the aid of a static pressure transducer. After in-house laboratory tests, even in instances where dampers and dirt filters are present the fan would always maintain the desired conditions.

When replacing old and outdated units, engineers need to consider a number of factors, including the size of the entryways in the building, the spaces used for mechanical and other equipment, and future accessibility of the system for maintenance and repairs. This task can be made more challenging by the location of the units within the air handling system and the physical size of the units being replaced. One old belt driven fan may be physically too large to remove from the building through standard doorways. The use of FanGrids in situations where time and space is an issue risks the least amount of downtime and offer the best opportunity for a rapid return to normal system operation. All components, including the fans, are small in size and easy for transportation, a huge factor in maintaining a tight replacement schedule and a reduction in costs when compared to alternative solutions.

The flexibility, operation and maintenance efficiency and excellent track record for maintaining specific air quality and acoustic conditions, FanGrids are a useful solution. As the technology and sophistication of systems continue to innovate, FanGrids should be considered as a solution for retrofitting old fans as well as new constructions.