Fan laws: The infinity laws for fans are used in HVAC to express the relationship between variables involved in fan performance and power. They are the basic proportional relationships between:

They are frequently used to estimate air moving device requirements. Additionally the fan laws can be used to calculate the performance of air movers in different sizes and speeds. 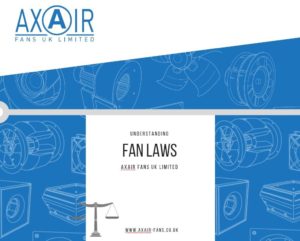 The three basic fan laws noted within this section are those that we will be concerning ourselves with most, that express the relationships as below-

The First Law – Volume Of Air:

This is a useful relationship as it allows us to use changes in volume when calculating the other fan laws.

The pressure developed by the fan and the pressure drop in a system varies with the square of the change of speed of the impeller or volume passing through the system.

The power required to move air through the fan or system varies with the cube of the change in volume and is calculated as follows:

Interestingly the noise generated by the fan is also a power relationship and again varies with the cube of the change in air volume being handled.

Fan laws are essentially about impellers and what happens to their characteristics when they undergo changes in rotational speed, air density, or are scaled in size.  They also help with the understanding of ventilation systems and the relationship between air volume flow rate and system total pressure.