In modern buildings heating and ventilating is delicate balance between maximum energy efficiencies and occupancy comfort, when buildings are in the concept design stage a crucial tool to make offers attractive is to offer low energy consumption using fan coil units to keep running costs to a minimum and ensure a low environmental impact.

In the past this was used only as a tool to win contracts but is now law in that types of buildings must adhere to specific efficiency guidelines to remain legal.

To keep energy consumption to a minimum in H&V systems certain energy hungry components must be made as efficient as possible in order to keep the overall energy spend within a system low. The term used to measure the amount of energy used within a heating and ventilation system is SFP, (specific fan power) and the unit this is expressed in is W/L/S, Watts per litre per second. All modern air handling units large or small have specific efficiencies to adhere to, often the most talked about and frequently discussed within the UK heating and ventilation market is specific fan powers relating to fan coil units.

Over the past ten years small air handling units have undergone many changes to improve their efficiency and with good reason!

Buildings that do not employ large plant room shared air handling units still have large heating and cooling demands, often the easiest way to provide this is the local air handling unit or fan coil unit. 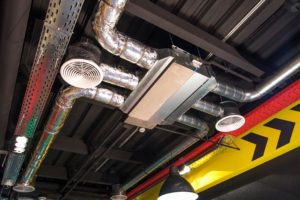 A fan coil unit is composed of similar components to a standard AHU although few have a heat recovery system or recuperator. Generally, arranged in a slim design to allow installation within a false ceiling although with current industrial trends units are often left on show to add to the overall effect. The air is handled in a linear, manner fans inlet air, passing it over a heating or cooling coil the treated air is then discharged into duct and diffused into the room as required. These types of small AHU are used in schools, offices restaurants and many other local heating and ventilating requirements.

If a building has a large number of air handling units the power demand will still be very large even though the individual units are not particularly power hungry compared to a large air handing unit. Traditionally fan coil units would have been fitted with multiple double inlet fans typically 133mm diameter fitted with a standard alternating current synchronous motor, units would generally be used under speed control to keep noise to a minimum as they are mounted in ceiling voids close to the occupants of the building. The issue with doing this is effectively controlling the motor efficiently without wasting power this is difficult to achieve and most methods of traditional speed control are effectively wasting energy by making a motor slip rather than slowing the polarity changes within the motor to slow the motor down. An AC motor would hope to achieve a specific fan power of 0.8 W/L/S, as mentioned this 0.8W/L/S is not a problem when viewed as a single fan but when multiplied by five hundred or one thousand fans mounts up to a large energy demand. EC motors have brought the biggest efficiency gains to the fan coil market in recent years using in built variable speed drives to power permanent magnet motors with almost no winding slip to bring efficiencies well below half that of the traditional AC counterpart.

The method for achieving these gains is intrinsic to the motor and has been honed over the past years to maximise efficiencies. This speed control method was developed from the method used to control standard three phase induction motors, with an EC motor the rotor is fitted with permanent magnets and the switching of the winding polarity is controlled by the on board drive. As this is being switched by FET’s (field – effect transistors) the winding polarity’s can be controlled with great accuracy and speed equating to a motor that can be controlled extremely accurately and efficiently at low speeds. 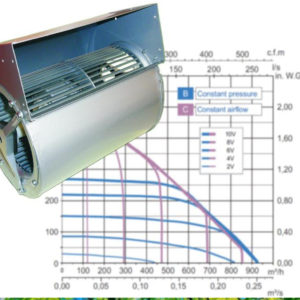 When EC and AC motors are directly compared in the same conditions the energy savings can be up to seventy percent.

Many fan coil units are fitted with multiple fans so as a fan fails for one reason or another the other fans within the system can speed up and pick up the lost air duty. Doing this can cause problems with noise and increase the units power demands.

Most fan coil units have an in built form of fan failure monitoring to ensure failures are quickly identified and service calls are scheduled to keep units running at maximum efficiency, this is particularly easy to do with EC motors which output either taco signals or inbuilt alarms which can be fed directly into building management systems to ensure all systems are monitored. Local units can also be given MODBUS addresses which enable global monitoring of systems.