The Production of Ethylene Gas in Anaerobic Digestion

The production of ethylene gas in anaerobic digestion requires consideration when it comes to corrosive fume extraction systems. Corrosion resistant polypropylene extraction fans are suitable for this type of harsh environment and are efficient in vacuuming the ethylene gas out of the tank, preventing a hazardous gas build up. Ethylene is a colourless gaseous plant hormone with a sweet odour, it influences many processes within the plant life cycle. It has advantages and disadvantages depending on how and where it is produced. However, the disadvantages can be a serious cause for concern in certain applications due to its highly reactive and flammable nature and the effects of long-term exposure. 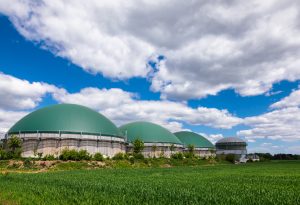 Anaerobic digestion is the process in which biodegradable organic waste is broken down biologically in the absence of oxygen. According to the US National Library of Medicine anaerobic digestion of organic waste is a sustainable waste treatment practice, as it reclaims potential energy from waste in the form of biogas and provides a route by which nutrients can be recycled back to land. However, it is a dangerous operation that poses serious threats if the correct systems are not in place. The build up of ethylene gases in a digestion tank pose the risk of fire or explosion if it is not exhausted out with a properly designed fume extraction system. An efficient ventilation system is vital to ventilate the tank once it is empty between digestion processes as the tank is a sealed room that operates without the presence of oxygen. Entering a tank without the correct ventilation in place could result in instant death.

In industrial market sectors, the production of ethylene is a natural occurrence as a result of processes involved in environmental or natural activities. In these types of industries an efficient fume extraction system consisting of mechanical fans and ducting is installed to remove the presence of any ethylene gas from the environment. A well-designed system will collect the air containing the gaseous molecules and vacuum them out safely into atmosphere. 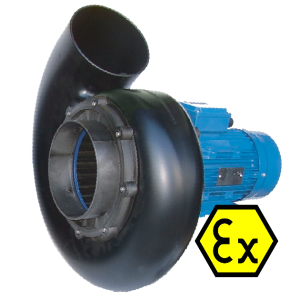 The ATEX S and ST ranges are moulded polypropylene; carbon-loaded to prevent static discharges. They are available for Category 3G Zone 2 applications and can be supplied with Ex ec or Ex eb (explosion-proof) motors to order. Thermistors are available, and heaters in motors above 0,75kW rated output. ATEX polypropylene fans perform well in corrosive environments and are therefore suitable for the extraction of gases or toxic fumes. They can be installed in indoor systems but have the added benefit of being weather protected  and suitable for the outdoors.

As stated by Public Health England, exposure to ethylene gas can pose several health risks such as;

On investigating the risks of ethylene exposure for human health and the environment, The WHO have also reported that ethylene oxide should be considered as a probable human carcinogen (a cause of cancer), and that its levels in the environment should be kept as low as possible.

Within certain industries ethylene can be a desirable compound, for example:

For more information or a specification for a fume extraction application, contact us on 01782 349 430 or email sales@axair-fans.co.uk. 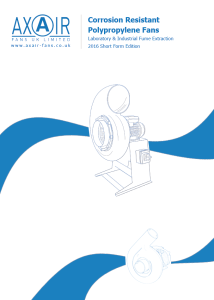