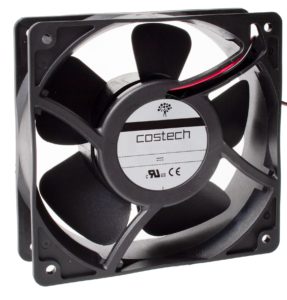 Axair Fans offer a special kind of cased axial fan by Costech. The fan has a metal frame with plastic impeller and is fitted with ball bearings. The speed of the fan is variable with temperature, as the temperature increases so does the speed. It has a temperature range of 25°C to 60°C.

The ‘clever’ energy saving fan from Costech is ideal for refrigeration, as the fan draws less power if speed is reduced which in turn saves energy. This is a simple and effective way to achieve temperature based speed control which is not usually available on such fan/motors. The fan is standard size of 120 x 120 x 38mm and is AC 230 volts, single phase.

For more information on Costech and our extensive range of fans, contact the Axair team today.