An industrial fan is a machine whose primary function is to provide and accommodate a large flow of air or gas to various processes of many industries. This is achieved by rotating a number of blades, connected to a hub and shaft, and driven by a motor. The flow rates of these fans  vary according to their application (Visit our applications page for more information). A blower is another name for a fan that operates where the resistance to the flow is primarily on the downstream side of the fan. Most industrial fans may be categorised into one of two general types: centrifugal fans and axial fans. 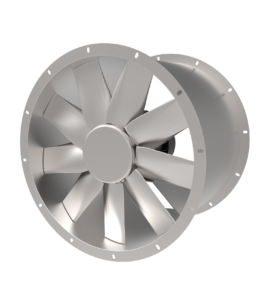 Sometimes known as propeller fans, this type of fan moves large volumes of air at relatively low pressures. Air enters and leaves the fan along the axis of the fan hub. Uses vary from small applications such as cooling electronics to ventilating buildings and tunnels.

The axial design uses axial forces to achieve the movement of the air or gas, spinning a central hub with blades extending radially from its outer diameter. The fluid is moved parallel to the fan wheel’s shaft, or axis of rotation. The axial fan wheel is often contained within a short section of cylindrical ductwork, to which inlet and outlet ducting can be connected.

Axial fan types have fan wheels with diameters that usually range from less than a foot (0.3 meters) to over 30 feet (9 m), although axial cooling tower fan wheels may exceed 82 feet (25 m) in diameter.

In general, axial fans are used where the principal requirement is for a large volume of flow, and the centrifugal design where both flow and higher pressures are required.

The centrifugal design uses the centrifugal force generated by a rotating disk, with blades mounted at right angles to the disk, to impart movement to the air or gas and increase its pressure. The assembly of the hub, disk and blades is known as the fan wheel, and often includes other components with aerodynamic or structural functions. The centrifugal fan wheel is typically contained within a scroll-shaped fan housing. The air or gas inside the spinning fan is thrown off the outside of the wheel, to an outlet at the housing’s largest diameter. This simultaneously draws more air or gas into the wheel through the central hole..

There are two main types of centrifugal fans: 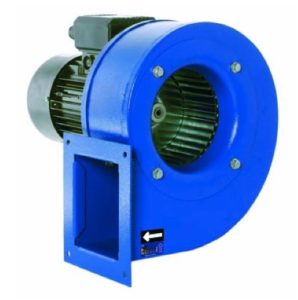 These are characterised by having many small blades which curve in the direction of rotation. This type of impeller draws most power at “free air” but speeds up as resistance is added and requires a scroll housing to operate effectively. Air is discharged tangentially, usually through a rectangular or circular discharge. The fans used in safety cabinets are largely of this type.

To see more of the forward curved range of centrifugal fans visit our product pages. 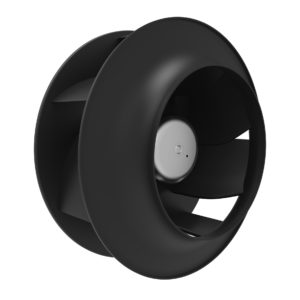 Backward curved centrifugal fans have a smaller number of large blades which may be aerofoil section, which curve away from the direction of rotation. Maximum power and minimum speed coincide at a point somewhere in the middle of the fan curve and as long as the motor is sized to operate at this point, the fan is said to have a “non-overloading characteristic”. the fan may be used with or without a scroll housing, giving great flexibility in system design.

This type of fan requires a higher speed to generate pressure than forward curved fans of a similar size. Backward curved fans such as the new EWheel design are the most energy efficient of all impeller designs and it is common that very large fan systems generally use backward curved fans for lower power consumption. Examples include inline duct fans.

To see more of the backward curved range of centrifugal fans visit our product pages or download the industrial brochure.