With the NHS now trialling hydroxyl radical decontamination technology to kill all surface and airborne pathogens, it is clear that the future of air quality will rely on this well researched, up and coming naturally devised technology. So, let’s learn a little more about Hydroxyl radicals and how they can help the fight against bacteria spread and indoor air quality.

What are Hydroxyl Radicals and how are they formed?

Hydroxyl radicals are photochemically formed in the atmosphere as a reaction to different wave lengths of light interacting with water and chemicals in the air. Hydroxyls are constantly being created in high quantities as a product of this natural process with each formation lasting less than a second. They instantly seek out and destroy contaminants in the air and on surfaces making them well known as ‘natures most powerful cleaning agent’. Hydroxyl radicals also contribute to the elimination of greenhouse gases such as carbon dioxide and methane.

The compound OH was developed in the 1970s by the military who used it for chemical, biological and radiological warfare. In the 1990s it was released for commercial use in European hospitals where it was found to be very efficient in removing harmful substances that contaminated the environment. The hydroxyl radicals (OH) when met with reactive oxygen species (ROS) becomes a biocidal substance attacking all harmful compounds in the air such as bacteria, viruses, harmful gases, mould, and respiratory allergens. The OH degrades these volatile compounds into mineral forms or harmless water-soluble organic compounds, making the environment safe for humans.

Humans, animals, and plants have built up an immunity against hydroxyl radicals due to co-existing with them throughout the process of evolution. The mucous membranes of humans and animals act as a barrier to neutralise the radicals, so they are not absorbed into the body. Plants have their own antioxidants to protect themselves against free radicals using enzyme and molecule defence mechanisms.

The Oxidisation Process of Hydroxyl Radicals

The reactive oxygen atom steals the hydrogen atom to form the hydroxyl radicals (OH). The (OH) radical then attacks the outer shell membrane of the virus or pathogens.

Once the outer cell membrane of the toxic cell (virus etc) is damaged the genetic information is disrupted and the cell gets destroyed (lipid peroxidation reaction).

The hydroxyl radicals also break down VOCs (volatile organic components) that land on surfaces and particles that are trapped in the air.

As we know, hydroxyl radicals are only produced in our natural atmosphere, however clean air devices such as the Wellisair has patented technology that creates these free radicals (OH) and disperses them constantly using the same process of oxidisation. Once the oxidisation process has started, the effect called “respiratory explosion” occurs, which consists of a series of cascade reactions that produce more hydroxyl radicals which accelerates the process of eliminating viruses and bacteria.

The national library of medicine conducted an experiment in testing surface cleaning in a computer classroom using a clean air device. The results showed that traces of (OH) radicals went from being barely detectable at all to a four times higher concentration measure whilst the device was in action, clearly showing the level of OH that can be released from clean air technology utilising Hydroxyl Radicals for air cleansing. Records of Wellisair testing continue to increase with a number of organisations concluding it to be an efficient device for reducing the amount of bacteria in the air and on surfaces.

If we’re looking for authority behind the use of Hydroxyl radicals, then the fact that Panasonic will continue to pursue the potential of “hydroxyl radicals contained in water” technology to address possible risks associated with air pollution such as new pathogenic microorganisms is a strong indicator that OH will be a leading strategic technology in the fight against airborne and surface disease prevention. Back in 2012 Panasonic conducted a virus clearance test with a 3rd party organisation and confirmed the effectiveness. Panasonic announced that “hydroxyl radicals contained in water” technology could be expected to have an inhibitory effect on new viruses and continue extensive research and development in this area.

Things to consider for the future of the oxidisation process:

According to the Royal Society of Chemistry  more research is needed into how the construction and design of a building effects the oxidising capability. Usually, the more energy efficient a building is, the least amount of air can get in and energy efficient homes have been recorded to have higher HCHO (formaldehyde organic air pollutant) levels. Formaldehyde is present in outdoor air, but indoor air formaldehyde concentrations are usually much higher because of indoor formaldehyde sources. Eco friendly building materials and cleaning agents can also increase the oxidisation capacity which they claim is rarely considered in labelling and evaluation of clean air devices. Other things to consider that may also affect the oxidant levels are changing the stove type from electric to gas, exposure to sunlight, changes in opening windows which will alter the natural ventilation, self-cleaning surfaces and surface coatings. Suggestions have been made to put resolution measurements in place to determine the complex reactions of the oxidants and their concentration in various settings. It is also noted that there is a clear difference in oxidisation capacity for surface areas visible to the eye and those that are hidden away such as attic spaces and garages. As well as the need for more research into this area there also needs to be realistic about how surface areas from hidden areas would be harder to purify due to a much higher build-up of pollution and an inability to access the closed off areas. In contrast the use of cascading hydroxyl radicals freely moving around the air and getting into these hard to reach places is much more proficient than manual cleaning especially in certain market sectors such as care homes and schools.

When Is Air Purification Needed

Since the Covid-19 pandemic and due to existing smog disasters in London in the past, air pollution is now being taken seriously and many charities are on board and getting more support from the government to tackle the growing concern of air pollution and poor health as a significant contribution. As stated by the Odorox hydroxyl group, air cleaning devices can eliminate smoke, soot and pollutants from fire damage and help to reduce the ongoing pollution intake from manufacturing plants. Another issue for concern is mould spores which can be found in damp areas of building and pose a serious health threat, something that commercial and domestic landlords are often liable for when renting a home or building and especially important for those in care home and hospitals. Clean air devices have also been proven to eliminate chemicals, viruses, bacteria and larger volatile compounds in the air and on surfaces. The rapid reproduction of hydroxyl radicals in air cleaning devices speeds up the process of air purification and prevents pollutant build up.

Key areas that can utilise the benefits of the hydroxyl radical production include maintaining cleanliness in hospitality and the utmost care in cleaning any utensils, equipment, chairs, tables, doors, door handles, restroom facilities after use by each customer, visitor or staff member.

Devices can be used inside offices to eliminate bacteria and viruses but also to reduce dust and particle build up from construction work. There’s extensive research and evidence that the Global pandemic has influenced mental health and stress levels, utilising a clean air device enables employers to show they have a duty of care to protecting their employees and protecting their mental health and wellbeing. Feeling safe and protected at work is a now a huge influencing factor for people returning to work.

In childcare settings such as nurseries, schools and play centres, it is particularly difficult to keep all areas surrounding children sanitised 24/7. Children, parents and teachers are constantly touching surfaces, doors, handles and for younger children crawling across floor surfaces and putting items in their mouths or using ball pits constantly means cleaning becomes a meticulous chore for care providers who do not have the time for increased housekeeping. It would be impossible to manually cleanse and may mean that more employees are taken on to pick up the new workload.

Hygiene is crucial across all areas when handling food, hands must be washed constantly when handling the food itself and all areas need to be constantly sanitised. Problem areas are the kitchen or food preparation areas, the packaging must remain in clean storage and handled carefully, all utensils, surfaces, doors, door handles must be sanitised after each person has interacted with them.

It can be challenging to get the message across to children and teenagers about the importance of upkeeping the best possible hygiene levels. Children can be forgetful when it comes to constantly washing and sanitising hands and it is not something they are used to on such an extreme level. Problem areas for spreading bacteria are doors, door handles, tables, chairs, sharing equipment or stationery, utensils in the kitchen area and the constant use of bathroom facilities.

It is hard to manage the cleanliness in carehomes 24/7 due to patients needing a lot of assistance and constantly being on the move in a busy environment. Often there is not enough staff to manage each individual patient, so their time is too precious to be focusing on constantly sanitising the building. Cleaners are assigned to keep all of the building clean and safe but it would be impossible for them to keep every area bacteria free 24/7, the buildings are huge and with various patients on the move constantly it is not manually possible for every area to always remain 100% clean.

Implementing clean air technology such as the Wellisair can eliminate these problems across the whole building if you implement the correct number of devices to cover the area required. The Wellisair can cover up to 70sqm per device and constantly eliminates bacteria in the air, on all surfaces and objects it lands on, which is much more effective than trying to manually sanitise every area on a 24/7 loop.

After the global pandemic many companies have become more aware of the level of pollution, we are subjected to on a daily basis, not just with the risk of viruses, but also air pollution in general. Keeping surface areas and door handles germ free 24/7 is practically impossible especially in environments such as nurseries and care homes where people need more hands-on assistance. Many businesses are now investing in clean air devices to help reduce stress in the workplace as staff return from long periods of working from home.

Advantages and Disadvantages of Hydroxyl Radicals 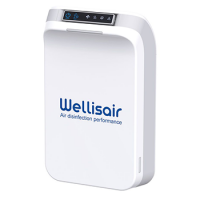