In an AC motor the magnetic field in the rotor is created by induction across the air gap between the stator and the rotor and this is inherently inefficient, creating what is known as “air losses” which compound the already significant inefficiency of the “shaded pole motor” used in most AC compact fans. 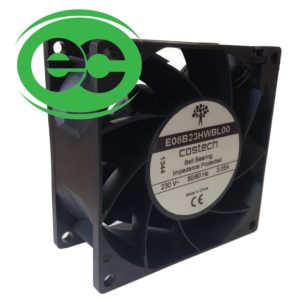 In DC (and EC) motors the second magnetic field is produced by permanent magnets, removing the losses created by induction across the air gap, a benefit of this is that the same power can be generated from a smaller coil, allowing a DC/EC motor to be smaller than its AC equivalent, as can be seen in these comparative photos of AC and EC fans from Costech.

The first DC motors had a rotating coil, surrounded by permanent magnets (the stator), to make the motor rotate requires the direction of the current and therefore the magnetic field in the coil to be reversed as the rotor turns. This is achieved with a commutator on the shaft, current is transferred to the coil by fixed carbon brushes, which require regular servicing and replacement, making “brushed” motors inappropriate for most long running applications.

The segmented commutator and spring fed carbon brush can be seen in this photograph of a modern, high power DC motor. The development of low cost electronics has allowed the replacement of  carbon brushes by a circuit that senses the position of the permanent magnets in relation to the coil and which switches the direction of the current and hence magnetic field in the coil to make the motor rotate.

This development means that it is possible to make the coil the stator and to put the permanent magnets into the rotor, simplifying the construction of the motor. Such motors are often described as “BrushlessDC motors”.

DC motors, of course, run on “direct current”, most commonly 12, 24 or 48VDC and this has to be provided by a power supply to convert from the mains AC voltage. Even with modern electronics such power supplies are substantial in size when providing enough power for several motors (as, for example on the evaporator of a refrigerated case) so the power supply becomes a separate unit which has to be located elsewhere in the cabinet.

Further developments in electronics have reduced the size of the components required to rectify and transform AC to DC such that it is now possible to integrate the power conversion onto the stator of the motor. Such motors with integrated power conversion have become commonly known as “EC motors”.

In the case of small, compact fans, as used on many refrigeration evaporator coils the electronics has been added into the same frame size as the equivalent AC versions. This means that the fans can be changed from AC to EC without the need to add a power supply or to make any other changes to the case. We compare AC and EC frame fans in our blog, read the full comparison here.

Larger fans and motors as used on condensing units can incorporate the necessary electronics into a terminal box, usually as an extension of the stator flange on external rotor motors such as this EC axial fan from Rosenberg. It is clear that the energy savings achieved by EC or DC motors will be attractive for use in refrigeration because of the vastly reduced running costs of the motors, commonly 70% or more and the reduction of waste heat from the motors entering the fridge circuit (100w of waste heat from the fan motors requires, typically, a further 50w of refrigeration to remove).
Some estimates suggest that 85% of the lifetime cost of a refrigerated display case is in the running costs, primarily electricity so it is clear that with even a single case the end user will make significant savings over the year and for users of multiple cases, like supermarkets, the saving on energy bills can be over £10,000 per year, simply by changing the evaporator fans from AC to EC. In most cases the pay back period for the additional cost of EC fans on an evaporator coil is less than one year.