The Peltier Effect and Thermoelectric Units

The Peltier effect, or Thermoelectric effect, is the name given to the occurrence of heat when an electric current passes across a junction between two conductors.

Thermoelectric units are designed to exploit this phenomenon. They are small static heat pumps which operate according to the principles of the Peltier effect, discovered by the French physicist Jean-Charles Peltier more than a century ago. The basic principles of thermodynamics can be applied to these devices just as is done with traditional heat pumps or other heat transfer devices. 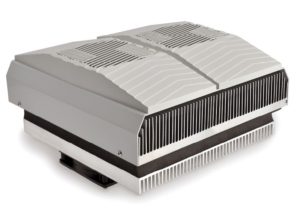 The “motor” of the thermoelectric system is represented by the thermoelectric module more commonly known as the “Peltier module”. This module consists of a certain number of thermocouples, all identical and made of semi-conducting material, with the two components of the couple having different electrical characteristics. These thermocouples are electrically connected in series, and thermally connected in parallel, so as to create different junctions. They are then put into a “sandwich”, between two very thin ceramic plates which serve both as mechanical support and electrical insulation. The system starts up when tension is given to both ends of the circuit. As soon as current flows through, one side of the element cools (gives off energy to the opposite side) and the other side heats up (absorbs energy from the cold side).

Many years of research aimed at the improvement of the efficiency of the thermoelectric modules, which represent the main component of the unit, and the continuous reduction in their cost are making the application of this technology more and more convenient both in the consumer and industrial fields.

How does it affect enclosures?

In practice, the heat transfer phenomenon described previously is obtained by assembling the thermoelectric modules within a complete thermoelectric unit, by using each module singularly or in mini-assemblies of multiples of the same module. When installed within an enclosure, the use of air or liquid heat sinks allows the heat transferred through the module(s) to be absorbed on one side and dissipated on the other. The complete units are designed for easy mounting and offer several advantages to a compressor system.

How much heat can be transferred?

Each thermoelectric unit is designed to transfer a specific quantity of heat within a specific time. Compared to a compressor system, the cost/performance ratio usually remains competitive for cooling capacities up to a maximum of 200W. This is currently a limitation of this technology, however continuous research efforts might increase this value and so make this cooling system suitable also when greater cooling power is required.

The thermoelectric unit does not feature any moving mechanical parts (except fans, if used) and is therefore extremely reliable, enjoying an almost unlimited life span and does not require maintenance. Its “static” construction makes the thermoelectric unit immune to vibrations thus allowing its use in any position, for this reason it is particularly suitable for applications where mounting is required on moving systems. The thermoelectric unit does not contain any polluting substances such as CFC or other gases which may harm the ambient, has a more compact and simple structure than a compressor system, and can be easily customised and mounted. Furthermore, they can cool hermetically sealed units and are extremely quiet.