The Evolution of the Plug Fan

In the air handling market over the past few years there has been a fundamental shift from old scroll type fans to higher efficiency plug type fans.

The older belt driven, or double inlet centrifugal models stood the test of time within ventilation systems due to their cost-effective nature and general simplicity, but as regulations evolved and the demand for higher efficiency within plant grew, they slowly became an unviable option as building owners demanded greater efficiency and a longer more efficient air handling unit life.

The requirement for greater efficiencies, comb 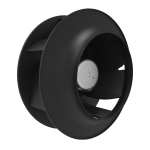 ined with advancements in technology, led to the introduction of an alternative to the double inlet; the plug fan starting with AC motors being replaced with higher efficiency EC or brushless DC motors.

The popularity of plug fans has increased over the years proving to reduce energy consumption, and CO2 emissions while also helping businesses to achieve ISO certification status and show their active reduction in energy use.

You will read anywhere that the most energy hungry component within any ventilation system is the fan, so by reducing the energy consumption within a system, building owners can make substantial savings and shorter payback periods can be achieved.

When compared to traditional double inlet fans, plug fans offer lower energy consumption and lower operating costs resulting in much shorter payback period and increased operating efficiency. Couple this with a significant increase in both volume and pressure, plug fans quickly became the choice to overcome the energy losses inherent in the operation of traditional double inlet fans as well as a reduction in maintenance time spent replacing drives and pulleys.

According to CIBSE the inefficiencies of these fans can be anything from 2 to 10%, definitely not insignificant. For those in the market with existing ventilation systems who looked to make the change to a more efficient system, component installation was less inconvenient than the whole system replacement. The cost of refurbishing a ventilation system is currently between 35-50% less than replacing the entire system and components can easily be installed and transported to site without the need for cranes and building shutdowns.

For those who may be unfamiliar with the term, plug fans are direct drive fans that do not require additional belts or pulleys. They are easy to install, quiet and low maintenance, their small profile allows them to fit into smaller, tight spaces, ideal for quick retrofits. Perfect when space is at a premium in many AHU designs.

Modern plug fan technology fitted with high efficiency EC motors and integrated drives can significantly increase the operating duty of both volume and pressure of the ventilation system, while also offering major reductions in operating noise and benefitting from built in electronics for communication, control and greater reliability. For example, the Rosenberg Generation 3 EC motor allows 40% more motor winding density creating a 30% increase in power. Many air handling unit manufacturers have extended the life of their AHU’s by replacing old centrifugal fans with modern plug fans. Once installed EC fans can be commissioned to run at fixed speeds where needed. Modulating the fan speed in response to specific time requirements or occupancy-based controls allows even further reductions to energy usage.

The evolution of plug fans and EC motors continues to develop in the UK fan market as international fan manufacturers invest further into research and development under a constant pressure to reduce energy consumption and CO2 emissions in line with legislation.