6 Advantages of Multiple Fans in a Fan Grid / Fan Wall

Multiple fans in parallel vs. a single fan in ventilation systems

In many cases, it is advantageous to use more than one fan running in parallel on a fan grid (or fan wall) in a ventilation system to achieve the benefits discussed below.

Typically 40% of a commercial buildings energy use comes from heating, ventilating and cooling with 50% of the HVAC energy consumption coming from fans. Given the increasing cause for environmental concern, designers should look to select EC plug fans which will not only provide the necessary reliability, but also provide optimum efficiency and environmental benefits. Savings as a result of moving from AC to EC occur from both improved motor efficiency and optimising system design. There is potential to achieve greater efficiency when the system’s operating range includes multiple plug fans running closer to their peak efficiencies, instead of one large fan controlled over a wide operating range. 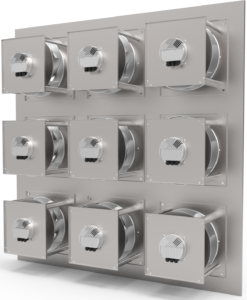 Continuous and consistent airflow is essential to virtually every facility. Running fans in parallel allows for redundancy which is designed to improve reliability and consistency. For example, if one fan fails within the ECFanGrid (multiple fan wall from Axair), only that portion of the airflow is lost, unlike single fan systems where the entire air handler goes offline. Moreover, the loss of airflow from one plug fan can be offset by increasing the speed of the remaining fans; this can be achieved automatically in conjunction with the building’s management system.

The number of plug fans in each ECFanGrid or fan wall system can vary according to the airflow requirements. For example, in a wall of 9 fans in a 3×3 configuration where only 7 fans may be required for normal operations to deliver the designed duty, the 8th and 9th space can be blanked off with a plate. If the demands on the AHU increase through building expansion for example, the blanking plates can be removed and 1 or 2 fans added to the grid to meet the new requirements.

ECFanGrids are ideally suited for retrofit AHU projects, particularly where a single large radial fan is being replaced. It is often the case that buildings have expanded around an AHU over its years of operation. This can make the extraction of the old fan problematic but the install of the new fan impossible without minor works to the fabric of the building. Plug fans can be walked through standard pedestrian doorways by no more than two operatives: a significant factor in maintaining a tight replacement schedule, reducing costs and downtime.

Case studies show that there is the potential to significantly lower noise when using an ECFanGrid. There are two major advantages to attenuate noise. First, the noise spectrum of smaller impellers contains higher frequencies, thus the wave lengths are shorter, allowing for the use of shorter attenuators. Second, the required length of the fan section in a typical air handling unit using a single large radial fan can be reduced dramatically, in some cases up to 50%. Read more about noise in fan systems here.

If you would like us to specify an ECFanGrid for your application, please fill out the form below and email it to sales@axair-fans.co.uk

This entry was posted on Wednesday, March 14th, 2018 at 9:06 am and is filed under Products. You can follow any responses to this entry through the RSS 2.0 feed. Both comments and pings are currently closed.