PRESSURISATION OF STAIRCASES: THE IMPORTANCE OF CORRECTLY SELECTING THE SYSTEM CLASS AND CONTROLLING THE DEGREE OF OVER PRESSURE 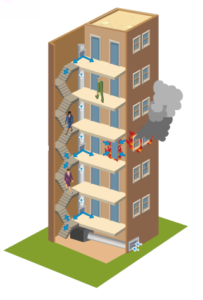 A pressurisation system is intended to prevent smoke leaking through closed doors into stairs by injecting clean air into the stairwell. The intent is to have the highest pressure in the stairwell and a reducing pressure in the accommodation area to facilitate pedestrian escape route and firefighting access. Since the publication of the relevant standard, EN 12101-6, familiarity has increased along with understanding of pressurisation systems. However, there are some aspects of the standard which are not taken into account. E.g selecting the correct class of pressurisation and recognising the purpose of the system.

The standard describes six differential pressure systems based on their function, ranging from facilitating a safe evacuation in the fire affected area only through to keeping firefighting access smoke free while evacuation takes place.

Class A system: For means of escape: The design conditions are based on the assumption that the building will not be evacuated unless it is directly threatened by fire. The level of compartment means that it is normally safe for the occupants to remain inside the building.

Class B system: For means of escape and firefighting: This pressure system may be used to minimise the possibility of serious smoke contamination during evacuation and while fire fighters are extinguishing the fire.

Class C system: For means of escape via simultaneous evacuation: These systems are designed for all of the occupants of the building to be evacuated when the fire alarm is activated.

Class D system: For means of escape. Risk to personnel that are sleeping: These systems are designed for buildings where the occupants may be sleeping.

Class E system: For means of escape via evacuation in phases: These systems are installed in buildings where evacuation is carried out in stages or phases.

Class F system: Fire protection system and escape means: These pressure systems are used to minimise the possibility of serious smoke contamination of staircases  used by fire fighters at the same time that the building is being evacuated.

Current standard EN 12101-6 is being reviewed by the CEN TC191 SC1 WG6 and the next review will only include 2 types of pressurisation systems for evacuation and firefighting. It is not yet known if the revised document will be adopted as a British Standard.

What performance is required?

For all possible systems, at least two evacuation situations are considered that may occur:

The following table lists the airflows required for each situation and the design flow based on the System Class.

A system must be installed which is capable of automatically and safely supplying the two air flows. At the same time, excessive air flow to the staircase must be prevented so that children or less able occupants can open the access door to the staircase during an evacuation.

Although several types of systems are available for controlling excess pressurisation of the staircase, the most commonly used system is the latter.  This consists of a fan controlled by a frequency inverter, which takes signals from a differential pressure sensor that measures the pressure difference between the pressurised evacuation route and the non-pressurised area. This maintains the desired pressure, normally 50 Pa, and subsequently controls the pressure during situations where the doors in the evacuation route are closed. In the case where a door is opened, the pressure in the staircase drastically decreases and so the fan speed increases to regulate the pressure. The fan then supplies the maximum design airflow for the installation when an evacuation route door is open or when the exit door to the outside is open.

Our technical team of Engineers are experienced in calculating overpressure and air release in addition to having a close relationship with our supplier partners, Sodeca. Contact us on 01782 349 430 or email sales@axair-fans.co.uk for more information.