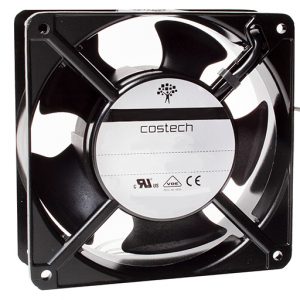 The rail network consists of seven lines which radiate from Manchester City Centre to terminals at Altrincham, Ashton-under-Lyne, Bury, East Didsbury, Eccles, Manchester Airport and Rochdale. Metrolink has 93 stops along 57 miles of track making it the largest light rail system in the United Kingdom. It consists of a mixture of on-street track shared with other traffic and reserved track, segregated from other traffic, often running alongside the roadway or in the central reservation, and converted former railway lines. The network is operated by a fleet of Bombardier Flexity Swift M5000s.

Axair Fans has been approached several times over the networks 20+ year lifetime to aid with the fleet’s minor and major overhauls.

Fans are replaced with every minor and major service as they are placed in a particularly harsh part of the train and are subject to a large amount of dust intake during the summer and salt atmosphere from road maintenance during the winter months.

Two models of fan are fitted from French manufacturer Ecofit both are protected by an IP55 rating and salt spray protective finishes.

The IP 55 rating is obtained by encapsulating the motor windings in an epoxy resin under a vacuum which not only encases the motor windings keeping the elements out but also provides extremely high grade insulation between motor winding phases. This insulation provides a low failure rate and enables the small motors to withstand the harsh electrical supply provided by the networks transformer and inverter controlled power line.

The salt spray protection is a type of paint finish added to the scroll, motor rotor and axial blades of the fans to protect the metal parts from corrosion.

For more information about Axair’s expertise and capability in supplying Rail Fans, please contact us on 01782 349 430 or click here to see our applications page.