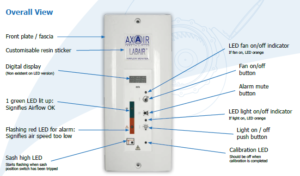 Axair’s Labair controls range has been created for applications involving hazardous fume extraction such as fume cupboards and chemical cabinets. There are two models available A and C, both of which are available in a standard version or Digital.

Both the A and C series are white with 3 push buttons: fan on/off, light on/off and alarm mute. They also feature a green LED light that illuminates to signify that the airflow is OK, a red LED light that flashes to alert that the air speed is too low and a sash high LED which starts flashing when the sash position has been tripped. Both controls feature a calibration LED which turns off once calibration is complete.  Labair controllers are factory pre-calibrated at 0.5 m/s but re-calibration is possible, and both feature a high precision numerical airflow sensor, alarm relay with an optional battery backup and can be configured both horizontally and vertically.  The digital versions both have a display of air velocity in metres per second (m/s) or feet per minute and have a 3 digit display. The digital Versions of the A and C series have a vertical configuration only. The A and C series have three optional extras; a surface box mounting (a plastic enclosure to mount the face plate and avoid profile cutting and service panel), an alarm relay (a remote alarm that can be triggered from a replay controller on the PCB), and a battery backup which triggers the red LED alarm. It does however remain fully functional for up to 12 hours after losing power.

The A series controller is best for basic air speed monitoring. The A series is an all in one, multifunctional unit. It features a fast and simple mounting system with an attractive design available with an LED digital display.

The C series offers great energy savings by allowing only the lowest amount of air to be exhausted. It provides additional user comfort by adjusting to low air speeds therefore reducing the noise level and has an additional level of flexibility as the fan speed can be adjusted instantly. The C series is composed of simple wiring within the VAV system and an inverter deriving their power from 230V single phase.

Axair can provide a wide range of accessories such as our Labair controllers to complement our range of corrosion resistant, hazardous fume fans for fume extraction applications. For more information call us on 01782 349 430 or alternatively email us at sales@axair-fans.co.uk