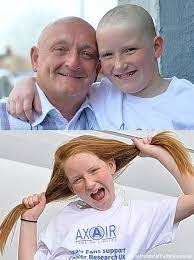 Daughter of Axair Fans Warehouse Manager, Jim Dobson, has carried out an inspiring headshave in aid of Cancer Research UK. Eleven year old Jamie-Leigh Dobson decided to shave her head to raise money for the worthy cause after her Grandad received the all clear from cancer in November.

Taking place at a charity event at Wolstanton Social Club, the event raised hundreds of pounds for Cancer Research UK  including a generous donation from Axair Fans UK Ltd.Jamie-Leigh’s granddad David Carter told The Sentinel: “When she told me she wanted to do this for charity, I couldn’t believe it…She looks terrific with her new hair, and I think she even looks a bit like me now.”

Jamie-Leigh already took part in the Race for Life at Trentham Gardens last year. She is already planning on her next fund raiser, she told The Sentinel: “It is definitely something I would do again and I am hoping to climb Snowdon next year to raise more money for Cancer Research.”