Landfill gas is a natural by-product produced by the microbial degradation of biodegradable organic material present within the landfill. The degradation process takes place in five stages as described later. The transition from one stage to the next being dependent upon many characteristics and therefore the time for which each stage is present is difficult to pre-determine. It is however, possible to have different stages of the degradation process taking place at any one time within a landfill site. The gas is composed of roughly 50% methane (CH4) and 50% carbon dioxide (CO2) and a small amount of non-methane organic compounds. Methane is a potent greenhouse gas and is harmful to the environment.

The factors that affect the production of landfill gas are typically:

• Waste composition (in particular the amount of readily degradable organic material)
• Density of the emplaced waste
• Moisture content and its distribution through the waste mass
• Acidity/alkalinity (pH) and nutrient availability (to feed the microbes).
• Temperature
• Presence of toxic agents and chemical inhibitors.

Various fume extraction processes are available with certain systems being designed to capture methane for use in generating power. Other equipment may be designed to burn the methane to stop it from entering into the atmosphere. This depends on the rate methane is generated from the decomposition of the organic waste.

Stage 1 of the process, which is aerobic in nature, involves the consumption of any oxygen present within the waste, primarily by aerobic microbial activity. This process results in the main in the evolution of carbon dioxide gas, water and heat. Providing there are no sources of air ingress to the waste to replenish those consumed at this stage, then the concentration of oxygen will reduce. Nitrogen will decay as the gases
produced purge it out from the waste mass.

Stage 2 of the degradation process involves the conversion from aerobic to anaerobic conditions within the waste mass, the results of this process being the production of ethanoic acid (acetic acid), ethanoates
(acetates), ethanol, ammonia, carbon dioxide, hydrogen, water and heat. The hydrogen and carbon dioxide produced during this process continues to purge the remaining nitrogen from the atmosphere within the
body of the waste.

Stage 3 of the degradation process is that where the methanogenesis process commences with methane and carbon dioxide being produced.

Stage 4 is where a period of equilibrium is reached in the degradation process. The conditions present in the body of waste provide a steady state condition during which methane and carbon dioxide are evolved in
a ratio of typically 3:2 (60:40%) by volume.

Stage 5 represents the final stage of the degradation process during which the gas composition within the body of waste gradually assumes that of atmospheric air.

Since landfill gas has the least onerous apparatus group and temperature class, all hazardous area equipment is suitable for use with landfill gas provided it has been correctly selected against other criteria, notably the zone. The presence of hydrogen as a gas produced in the microbial decomposition of waste has not been considered. In general, as hydrogen is associated with the early stages of the degradation process, it is unlikely that gas extraction for power generation or utilisation (combustion) within a landfill gas flare would be initiated. However, it may be the case where some form of odour control involving gas collection from waste in stages 1 to 3 of the decomposition process is required. Also, monitoring may take place, releasing hydrogen. If this is the case, then a specific risk assessment based on actual measurements and conditions present should be undertaken to identify any risk of a potential explosive atmosphere being present with, where required, suitable and sufficient mitigating measures put in place. Hydrogen is a IIC/T1 gas. Learn more about ATEX Temperature classes here.

As an example landfill gas may have the following properties:

Relationship between grades of release, zones and installed equipment

Potential releases of flammable materials in landfills and all other ATEX applications are assigned ‘grades of release’, which are defined as follows in EN 60079-10:2003 section 2.7:

Equipment manufactured against the ATEX Product Directive is marked to indicate its ‘Category’. The category is used to select the zone or zones in which it may be used.

The grade of release and zone are not synonymous. Poor ventilation may result in a more stringent zone (typical of pits, trenches and indoor situations where ventilation is limited). High levels of ventilation (e.g. local extract ventilation) may be used to allow a less stringent zone classification to be defined. Learn more about ATEX Gas and  Dust zones here. 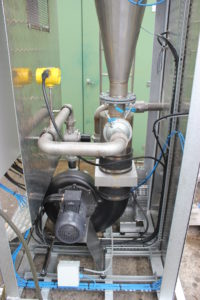 Axair Fans supplies polypropylene fans for fume extraction systems in landfill applications. One such customer in the landfill gas renewable energy industry is Landfill Systems Limited. Based in Suffolk, the company manufactures bespoke landfill and biogas gas flares, installing plant worldwide. Andrew Ward, product sales engineer at Axair Fans, specified the ‘S’ range of fans designed to provide high air flow rate against medium system pressures. Due to the potentially flammable nature of landfill gases, the ATEX (Atmospheres Explosibles) certified version of the ‘S’ range was required. The fans are constructed from a polypropylene type material that is certified for ATEX Zone 2 applications with the fan pedestals manufactured in steel. Likewise, the fan motors are also made to an ATEX specification to conform to the European equipment directive.

To achieve better energy efficiencies, an inverter was used to control the fans. This facilitates speed control, meaning the fan will only do its required duty. As the fan only uses the minimum energy required, savings were made on running costs. The fan motors were also fitted with thermistors which are wired into the inverter to shut the system down if the motor starts to overheat. This failsafe is a regulation requirement. 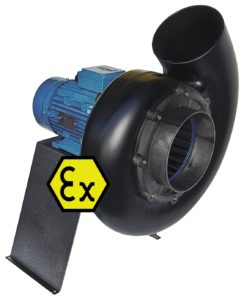 In addition to the ‘S’ range, Axair Fans also offer ‘ST’ fans available in ATEX versions suitable for Zone 2 applications. These ATEX polypropylene fans are both suitable for extracting corrosive air from a wide range of applications other than landfill gases, such as biomass systems and odour control systems. Download the industrial fume extraction brochure.

For more information or to ask one of Axair’s specially trained ATEX fume extraction product sales engineers to specify fans for your application, contact us or call 01782 349 430.

Please note prior to fan selection, if you are not sure whether you need an explosion proof ATEX fume extraction fan or need to know the zone in which your application is classified, please consult an official authority.